Some of the most dramatic storylines, TV shows and growing belief systems is that large corporations are evil and are trying to take over the world. Real stories of fighting against “the man” with collective groups like Anonymous and television series like Mr. Robot all follow a theme. The more information these conglomerates have, the more dangerous they are.

Data storage is at the center of this never ending story between activists, the top 1% and the general public. Where do you store your files so that those evil corporations cannot access them? Napster showed us the possibility, for music files primarily, and was immediately shut down.

Then BitTorrent protocol entered the story in the early 2000’s. Bram Cohen changed the sharing and storage industry forever.

Now, technology based on that idea, combined with Blockchain is creating a way that everyone in the world can have distributed storage inexpensively and secure, without relying on a private network from Google, Microsoft or Amazon.

How This Will Make The Cloud Obsolete

John McAfee was quoted in a Business Insider piece that the new technology his company is using will “make the cloud completely obsolete“. Not much is known to the public about how, but it is going to kill the cloud with blockchain and BitTorrent protocols. Even though McAfee is considered to be on the fringe, everyone knows he’s talking about blockchain.

Early attempts like Wuala or All My Data, P2P storage systems weren’t easy enough to use and not suitable for power users. But they’ve proven two interesting benefits of such storage:

A few companies (Symform and BitSync) have tried with little luck to make this a reality, but mostly got stuck at security and uptime. But the innovation needed to make this type of shared storage a success is here now. Petabytes of information are being stored currently across 175 million files in a global peer-to-peer network, and that’s just one system.

Just like the data it stores, centralized cloud networks also centralize its security. Inside that centralization lies the inherent problem with traditional cloud storage, security. With over $1 Billion dollars being invested in BitCoin, the security blockchain brings with it is unmatched.

The key part is that there is no central operator of the network. People can buy and sell app coins based on the value they think the project may have in the future, similar to a stock, and cash out whenever they want. This is becoming a revolutionary way to raise money, but the security this brings means distributed storage is here to stay.

All of these companies are using this decentralized business model on a blockchain.

People get paid to help predict outcomes for trading.

Since the advent of BitTorrent, shared storage has always been explored, but today the problematic file writing load, security and uptime issues are finally solved.

Here’s How The Cloud Will Come Back To Earth

With BitTorrent technology, buying racks and racks of space to store more data on just doesn’t make since. The existing network of devices, from Raspberry Pi to blades in storage rooms, is being used as the new cloud storage. Blockchain is the nail in the coffin of centralized cloud storage because of its level of security.

The only missing piece has been consistent performance and uptime, which is being solved. New systems are being created that keep uptime, tracking (for billing or earning purposes) and security at an unmatched level.

Here’s how network performance is maintained:

Here’s an example of the increased uptime and performance with a level DB used file system over hundreds of instances. 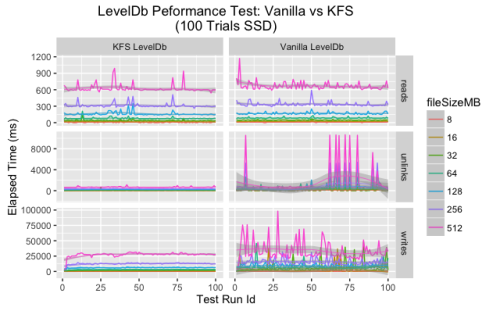 From A Level DB Performance Test

By creating a new file system, startups have fixed the most painful problems of distributed file storage: downtime and compaction.

Remember That Nail In The Coffin, Blockchain?

Because data on a P2P storage network is stored in different locations, broken down into parts, and then further shredded into fragments, it’s almost impossible for anyone besides the owner to get access.

Blockchain used in this capacity makes the entire network secure, with no one holding the keys except for you.

Here’s why the security works:

Once you have complete record of all data pieces being moved, it is easy to track micro-billing for each transaction (in space rental models) and how to encourage new users with economic motivation to grow the network.

With no more technical instances stopping, high security and a complete new economy of scale, no wonder John McAfee, as cooky as he seems, predicts the cloud will become obsolete.

For now this is exciting tech innovation for developers and startup founders. Once this becomes mainstream practice, larger brands will expand its usage across multiple industries and open doors for consumer use. Either way, you won’t have to rely on Google or Amazon for your storage needs. If the Mr. Robot plot ever becomes a real world scenario, your data will be safely behind your key.

I find good ideas and people in internet and technology and help them grow into $100m companies that make customers, employees and investors happy. Sometimes I do this myself, somethings I help other people do this better than me. I serve as Director at GVA Capital – early-stage VC firm, helping great startups successfully go global.